Jews in Israel are outraged that an Evangelical Christian program ultimately diverged from the established narrative of religious Jewish supremacy. After a great amount of hateful backlash, the channel was removed from the air. Such intolerance from those that always plead for tolerance from others is deplorable.

Meanwhile, in America, viewers of Christian television must routinely contend with being preached to by Zionist Jews who cleverly and boldly use Christianity as a vehicle to turn Christian attention back to Israel and the plight and exceptionalism of the Jewish people.

Miriam Adelson, the wealthiest woman in Israel, sings the praises of Donald Trump, even suggesting that he belongs in the Bible. Why is that? The post Miriam Adelson wishes for the Book of Trump in the Bible appeared first on If Americans Knew Blog.

France Jeunesse Civitas and Tradition Catholique have their own pages on Facebook.  In recent posts, they have expressed outrage at proposals to add an amusement park to the rebuilding of the burnt down Cathedral of Notre Dame.

These organizations are evidence that French Catholics have had enough of  having their country over-run by liberal Jewry to the extent that their cherished way of life and their Catholic faith has suffered tremendously since the end of WW2.

Since 2016, there has been a marked Catholic revival in France which is fighting for a return to its cherished beliefs and way of life in the face of rampant liberal Jewry in France.

This is ONE BRAVE FIGHT as rampant liberal Jewry has all but sacked France.   As citizens that support the responsible use of our tax dollars and respect for our religious beliefs- we must support the French Catholic’s efforts to fight Jewry in France which has all but made a mockery of Jesus, Mary, and the Catholic faith.

Posted by Tom Compton May 9, 2019 We Hold These Truths has been challenging Christians about the dangers of Christian Zionism since 2002. Our latest effort took place in Fresno, CA at the Altar Conference: Where Heaven Meets Earth,” that describes it as “a weekend of dynamic worship and powerful teaching, provoking believers of all backgrounds into a lifestyle […]

This is the next thing people, and we know who doesn’t care if you can cook or not in your home when it comes to real estate in San Francisco…

This is not only anti-American and anti-citizen, but anti-human.

The true and serious problem that needs addressing is Anti-Christian-ism in today’s Western World.

“A certain nation, I can’t name it because I would be attacked from all sides immediately, said this: ‘Our natural enemy is the Catholic Church. We need to slander them and sow hatred against them, we have to create scandals about their private lives to incite hatred and ridicule against them. We must strengthen our media because then our control will be strong and secure’,” Jez said.

What’s inside of this book?  To learn more, I went to its table of content.

Low and behold, view the shocking and slanderous assertion in section 6 of “First the Jews'” table of Contents:

This must be why Jewish Zionism is heavily infiltrating Christian television/radio/publications/politics.  For Zionist Jews, Christianity has to be more Zio-friendly; that’s a clear conflict of interest.  Anytime you watch or listen to anything “Christian” and then hear a clear call to idolize Jews, Israel, Holocaust survivors, and/or send them money for this reason, that is immediately “Anti-Christian”.  No one, not Jews, not Israel, not even Holocaust survivors surpass Jesus Christ- And Jesus Christ never asked for money because He was (IS) special. 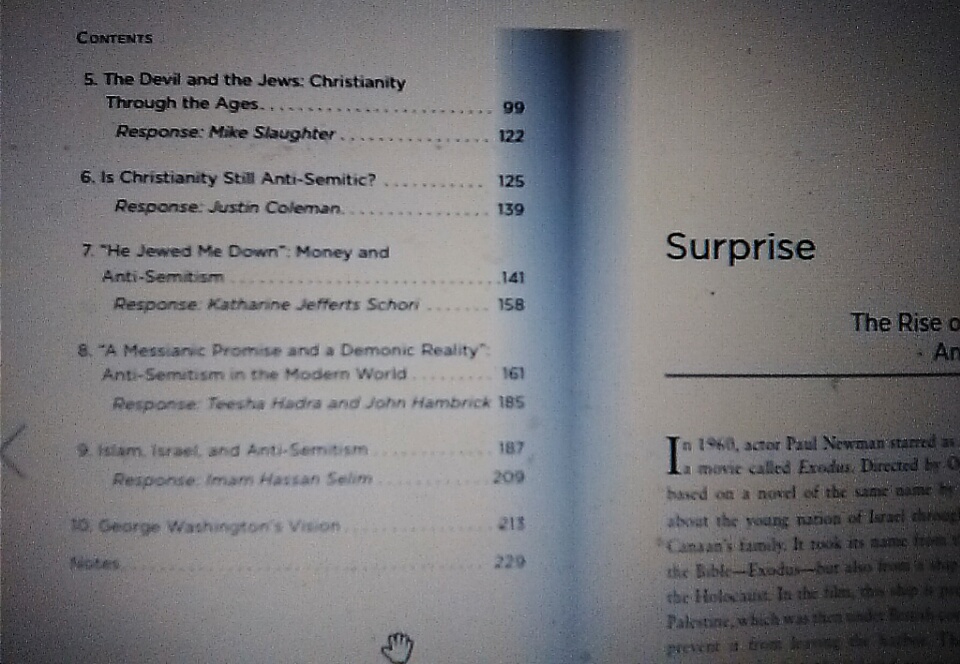 Go to “look inside/table of contents” to view the same page online:

Given everything that happened leading up to Easter Sunday, disregarding this kind of intelligence is not simply negligent, but criminal.